Color/Appearance: Aptly named, in some instances freshly surfaced Redheart can be a very bright, watermelon red—though color can vary in intensity and hue from board to board: anywhere from a light orange/pink, (similar to Pink Ivory), to a darker brownish red. In some cases. Redheart’s vibrant color quickly fades to a reddish brown in direct sunlight, though this color change can be slowed (but usually not stopped entirely) by using a finish with UV inhibitors, and keeping the wood away from strong lighting.

Grain/Texture: Grain is usually straight or irregular, with a fine, even texture. Low to medium natural luster.

Rot Resistance: Laboratory tests have shown Redheart to be moderately durable to attack by decay fungi.

Workability: Redheart has good working characteristics, and planes, machines, and sands well. Turns, glues, and finishes well, though a brown color shift is to be expected. Odor: Redheart can have a distinct, rubber-like smell when being worked depending on species.

Allergies/Toxicity: There have been no adverse health effects associated with Redheart. See the articles Wood Allergies and Toxicity and Wood Dust Safety for more information.

Pricing/Availability: Sometimes available as narrow boards, but commonly available as turning squares. Tends to be on the medium to high side for an imported hardwood.

Sustainability: This wood species is not listed in the CITES Appendices or on the IUCN Red List of Threatened Species.

Comments: Commonly called Chakte Kok (with a multitude of variant spellings), this species has been previously placed in the Sickingia genus. Another species that’s also in the Rubiaceæ family is Cosmocalyx spectabilis, which is typically sold interchangeably as Chakte Kok. A third, botanically unrelated wood (Erythroxylaceæ family), which bears an uncanny similarity in nearly every respect to the two other species is Erythroxylum havanense, which is most commonly sold as Redheart. The scans show examples of what is labeled as Redheart (Erythroxylum spp.), while the mechanical data numbers reference the wood referred to as Chakte Kok (Simira genus). 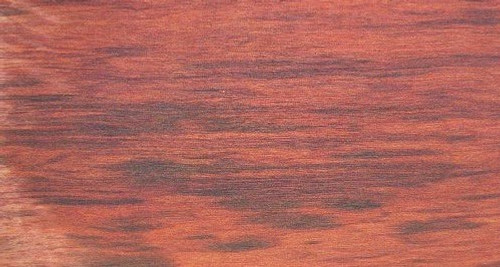